Rector’s Ramblings: Feast of the Assumption / Dormition of the Theotokos, August 15th , 2022 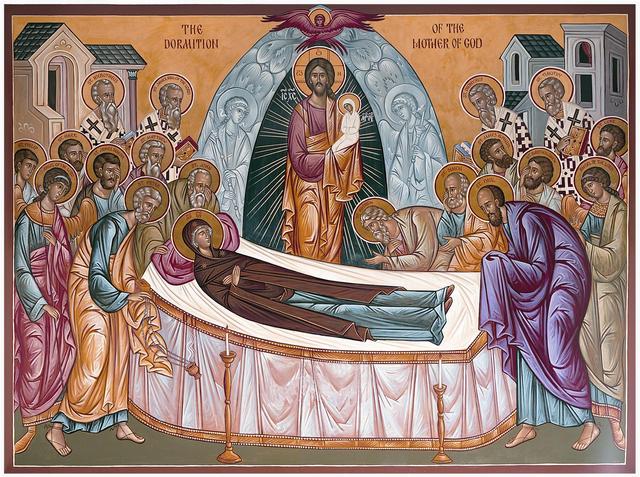 Rector’s Ramblings: Feast of the Assumption / Dormition of the Theotokos, August 15th , 2022

Feast of the Assumption of the Blessed Virgin Mary (Roman Catholic), Dormition of the Theotokos (Eastern Orthodox)

Brothers and sisters in Christ,

The Feast of the Assumption, as it is usually called in the Western Christian tradition, or the Dormition of the Theotokos (“God-bearer”) as it is known in the East, is the commemoration, as celebrated in the Catholic Church, Eastern Orthodox Churches, Oriental Orthodoxy, Church of the East, and some Lutheran and Anglo-Catholic Churches, among others, of the presumed bodily taking up of Mary, the mother of Jesus, into Heaven at the end of her earthly life.

I say “presumed” because, although there are references to this concept found as far back as the 5th century (or earlier) of the Christian era, it is not found in the Holy Scriptures, but only in certain apocryphal writings, and what is generally referred to as the “holy tradition” of the first-millennium Church. It did not even become a formal dogma in the Roman Church until 1950!

With respect to classical Anglicanism, it is perhaps worth noting in this context that Article VI of the Thirty-Nine Articles states,

“Holy Scripture containeth all things necessary to salvation: so that whatsoever is not read therein, nor may be proved thereby, is not to be required of any man, that it should be believed as an article of the Faith, or be thought requisite or necessary to salvation,” and that “In the name of the Holy Scripture we do understand those canonical Books of the Old and New Testament, of whose authority was never any doubt in the Church.”

However, it is important to note that, although there is no Scriptural reference to the taking-up of Mary bodily into heaven, either before or after the death of her physical body, neither is there any Scriptural record of her death, nor are there any bodily relics of her. One would expect such things to have been clearly attested, and deeply cherished, by the early Church if indeed they existed! [*] These facts, combined with the long tradition of this idea, means that it cannot be rejected out of hand.

[* There does exist, however, a site reputed to be the Tomb of the Virgin Mary, in the Kidron Valley, at the foot of the Mount of Olives, in Jerusalem – which is empty:

“The Sacred Tradition of Eastern Christianity teaches that the Virgin Mary died a natural death, like any human being; that her soul was received by Christ upon death; and that her body was resurrected on the third day after her repose, at which time she was taken up, soul and body, into heaven in anticipation of the general resurrection. Her tomb, according to this teaching, was found empty on the third day. Roman Catholic teaching holds that Mary was ‘assumed’ into heaven in bodily form, the Assumption; the question of whether or not Mary actually underwent physical death remains open in the Catholic view.”]

Due to these uncertainties, and the lack of clear Scriptural attestation, it is probably best and safest to understand this belief as a matter of adiaphora – that is to say, something which is neither expressly commanded nor forbidden by the Word of God (e.g., Scripture) – and/or within the category of theologoumena: commonly defined as “a theological assertion or statement not derived from divine revelation,” or “a theological statement or concept in the area of individual opinion rather than of authoritative doctrine”… at least, for us as Anglicans.

With that as context, we can talk about how the concept of the Assumption or Dormition of the Blessed Virgin Mary has been thought of and understood in the history of Church, and what we can take from it to further our own closer walk with God, and with His Son, our Lord and Saviour, Jesus Christ. Regarding the assumption itself, Ian Paul writes,

“The assumption of Mary refers to a belief concerning how she departed her life on earth. About this, Scripture is silent – we last see her at the start of Acts waiting for the Spirit. As late as the fourth century there was no clear church teaching about the end of her life but shortly after the Council of Ephesus in 431, the first Council to deal explicitly with Mary, this began to change… In the words of the 2004 Anglican-Roman Catholic (ARCIC) statement on Mary [.pdf here]:

“The feast of Mary’s ‘falling asleep’ dates from the end of the sixth century, but was influenced by legendary narratives of the end of Mary’s life already widely in circulation…

“Belief in her assumption was grounded in the promise of the resurrection of the dead and the recognition of Mary’s dignity as Theotókos and ‘Ever Virgin’, coupled with the conviction that she who had borne Life should be associated [with] her Son’s victory over death, and with the glorification of his Body, the Church.”

The following reflections on Mary herself are taken from an essay by Revd Dr Philip H. Pfatteicher, as quoted on the excellent website, For All the Saints:

“In the person of the Virgin Mary, the Church has seen an image of itself, the representative of the community of the faithful, a model of what each Christian ought to be: prayerful, humble, joyfully submissive to the will and word of God, devoted to her Son and loyal to him even when she did not understand him. The honor paid to her goes back to the earliest days of Christianity, and because she is the mother of the Redeemer she is accounted preeminent among the saints…

“More is known about her than about most of the apostles. Mary the mother of Jesus is mentioned in a number of places in the Gospels and the book of Acts, and a dozen incidents of her life are recorded. These include:

She is thus pictured as being present at all [or nearly all: two notable exceptions being His Baptism in the River Jordan by John the Baptist, and His Transfiguration] the important events of her Son’s life.

“The other books of the New Testament are silent about Mary. Saint Paul, not recording her name, says simply that Jesus was ‘born of a woman’ (Galatians 4:4). Little is known about the rest of her life, which traditions say she spent in Jerusalem (the tomb of the Virgin is shown in the Kidron Valley) or Ephesus. The second century Protoevangelium of James identifies her parents as Anne and Joachim.

“The angel’s words in Luke 1:32 imply that Mary was descended from David… She is a model of bold but tender love: she stood at the Cross to watch her Son die as an enemy of the state; Jesus’ brothers are not reported to have been present. The earliest feasts celebrating her death were observed in Palestine from the fifth century, possibly at Antioch in the fourth century. The date of August 15, ordered by the emperor Maurice [ruled 582-603], probably originated with the dedication of a church in her honor.

“By the sixth century the observance of the date of August 15 was widespread in the East, and the feast day gradually became known as the Feast of the Dormition (Koimesis), the ‘Falling Asleep,’ or passing from this life, of the Virgin. In the seventh century this feast day was observed in Rome, and from there it spread throughout the West, where by the ninth century it had come to be called the Feast of the Assumption (referring to the reception of Mary’s body and soul into heaven in anticipation of the general resurrection of the bodies of all the dead at the last day).

“The belief, apparently unknown to Ambrose (†397) and Epiphanius (†403), appears in certain New Testament apocrypha from the latter fourth century and was first formulated in orthodox circles in the West by Gregory of Tours (†594). In the East, the writings of Germanus, Patriarch of Constantinople (†730), and other authors testify to the acceptance of the doctrine. In 1950 Pope Pius XII proclaimed that the teaching of the Assumption was elevated to the status of a dogma in the Roman Catholic Church…

“Mary’s perpetual virginity (virgin before, during, and after the birth of Jesus) is first asserted in the apocryphal book of James, may have been taught by Irenaeus (†c. 202) and Clement of Alexandria, and was certainly held by Athanasius (†373), who used the term “ever virgin”. The teaching was accepted by East and West from the fifth century onward and was given additional impetus at the Council of Ephesus (431), which upheld the title Theotokos (bearer of God), common from the fourth century.

“N.B.: The perpetual virginity of Mary was also accepted and taught by the Reformers, including Martin Luther and John Calvin, and John Wesley stated in a letter to a Roman Catholic correspondent that he, too, accepted the doctrine.”

When we consider Mary, it is important to keep in mind that throughout the Holy Scriptures – as well as in classical Christian tradition, including iconography – her role is always to point toward her Son, our Lord and Saviour, Jesus Christ. She is indeed worthy of great honor and even reverence, for that very reason, as well as for the fact that she bore Him within herself, being the spotless vessel of His Incarnation, and for the fact that it was her “fiat” – “Behold the handmaid of the Lord; be it unto me according to thy word” (Luke 1:38) which made the Incarnation possible in the first place… at least, the way it happened.

But it is important also to keep in mind the words of her Son, Our Lord Jesus Christ himself: “And it came to pass, as he spake these things, a certain woman of the company lifted up her voice, and said unto him, Blessed is the womb that bare thee, and the paps which thou hast sucked. But he said, Yea rather, blessed are they that hear the word of God, and keep it” (Luke 11:27-28). Our contemplation of Mary ought to carry us into an even deeper love for and devotion to her Son, our Lord, who alone is our Saviour and Redeemer, our Mediator and Advocate.

To repeat the reflection quoted above, “In the person of the Virgin Mary, the Church has seen an image of itself, the representative of the community of the faithful, a model of what each Christian ought to be: prayerful, humble, joyfully submissive to the will and word of God, devoted to her Son and loyal to him even when she did not understand him.” May it be so with each of us!

Faithfully yours in Christ,